Blockchain technology, Bitcoin, and cryptocurrencies have generated a lot of discussion in recent times. Despite all the hype, there is a clear gap of understanding about what they are. And more specifically, how the accounting industry will be impacted.

To make sense of it all, it helps to break down the blockchain into its five key principles.

The blockchain does not hold its data in one single place. This decentralization, typically in the public domain, is a primary characteristic that differentiates it from traditional technologies.

The strengths of decentralizing data are highlighted when you compare this to data held in one place. When it is stored on a desktop computer, for example, data has a serious chance of being compromised, corrupted, or altered. The computer might be stolen, it can break, or because the other party involved with the transaction has virtually no involvement, wrong data can be entered into a desktop ledger.

Even cloud-based applications are still fundamentally centralized. It is the responsibility of one company that controls the data to ensure it does not get hacked, lost or stolen. Transactions can be entered by people with no or little acknowledgment from the other party in that transaction.

The blockchain eliminates any risks that come with data being held centrally by storing data across the network. 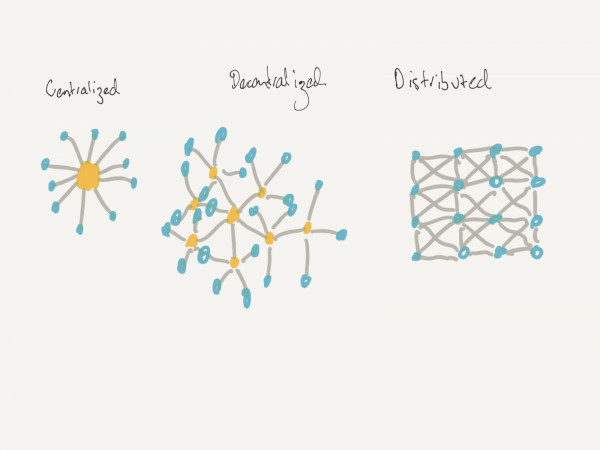 At least two parties are involved with all blockchain transactions, making them peer-to-peer. This principle is more easily understood by comparing a standard credit card transaction with the first practical use of the blockchain protocol.

When you pay by credit card for your groceries, up to five parties are involved to move your money to the store—the consumer (yourself), the merchant (your local grocer), the issuer (Visa or MasterCard), your bank, and the merchant’s bank. On the way through, each party takes money before your funds finally arrive in the account of the local grocer. Until blockchain, having all these parties involved has been the simplest way to make regular cash transactions and avoid the double spend problem (you cannot spend money you do not have).

With Bitcoin and other cryptocurrencies, however, a transaction can take place between two people for free, with a guarantee that the customer has the necessary funds before transferring the amount to the other party. Transactions like this have become expensive and slow for Bitcoin in particular, but as the technology advances, this is expected to get resolved.

With blockchain technology, two people who are involved in a transaction can both verify the details are correct without the need for anyone else to be involved. One person can issue an invoice to another on the blockchain, who then verifies and accepts the particulars. The two are then intrinsically connected by the transaction, and neither are able to change the details without the other’s permission. Consider the significant potential this can have on accounting and payments in the not-too-distant future. 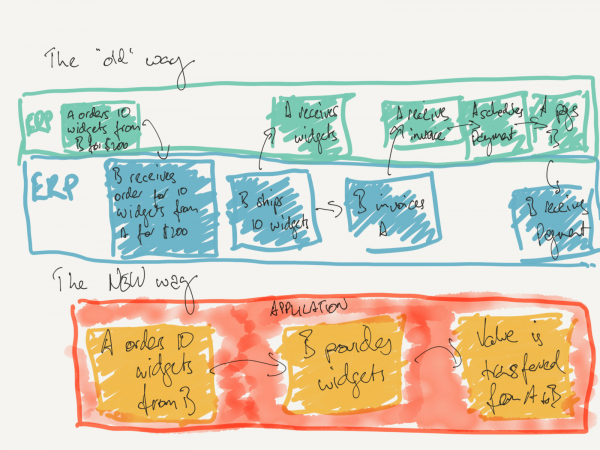 In the near future, all transactions will look something like this.

Participants in a blockchain transaction can remain anonymous, or their details can be opened to ‘actors’ who might need to participate in the transaction. The transparency is provided through a disguised identity—or pseudonymity.

An obvious use for this is payroll. Commonly, two key parties are involved in a payroll transaction—the employer and the employee. Their details are nobody’s business unless someone has a right to know the transaction details—such as taxation regulators.

In the UK for example, employers are expected to report every payroll to HMRC. If payroll transactions took place on the blockchain, the details could be reported to HMRC automatically without the need for any middleware software. While they are yet to take advantage of this opportunity, the potential benefit to Governments is enormous.

Transparency with disguised or selective identity has the potential to provide many more benefits and uses, including the transition of documents between known parties, proof of origin of items, in supply chain and logistics, and many other places.

Blockchain transactions are linked to every transaction record that came before them, which means that any blockchain record cannot be changed once it is entered. This is where the term ‘chain’ comes from. Computational algorithms and approaches ensure that the blockchain recording is permanent, chronologically ordered, and available to all others on the network.

This irreversibility is extremely relevant to accounting, and has the has the potential for many use cases.

With audit, for example, all relevant transactions would be irrefutable if they were on a blockchain—multi-party involvement would guarantee that they would not have been changed in any way. That will not leave much left for accountants to audit.

Fraud can still be committed in this situation, but it requires multiple parties to consent at the very least, which could result in more malicious fraudulent transactions. What we do know, is that blockchain will enable more connected and more reliable transactions, requiring less manual intervention.

Each transaction in the blockchain can contain computational logic—a smart contract that acts as instructions for the transaction. Some industry examples for this could include:

Technically, a client engagement letter could be a smart contract implemented on the blockchain—your client agrees to pay for a certain set of services your firm provides to them. The smart contract could trigger payment when each milestone is reached, whether that is a date or completion of certain tasks or work items.

Eventually, the whole management of your firm’s workflow—invoicing, payment and reconciliation—might be completed entirely on the blockchain. Beyond the actual work, there would be no, or little administrative tasks for your staff to do. Further in the future, this work might entail just the very high-level value-add aspects, rather than the repetitive tasks.

What is undeniable, is that accounting will be impacted as much as any industry by the blockchain. Those who take the time now to familiarize themselves with the technology and new wave of protocols will reap the rewards.

Stuart started his first business 11 years ago and has had many successful ventures, including Paycycle, founded in 2009, which he sold to Xero in 2011. He then built the global Xero Payroll team that delivers payroll software across the US, AU, UK and NZ markets. Stuart is now paving the way for smarter tools to improve how accountants collaborate with their colleagues and look after their clients.

Embracing collaborative intelligence to realize the benefits of new technologies

To realize the potential of new technologies such as artificial intelligence, machine learning and automation, humans and machines must work together.

The essential basics of blockchain in a simple and easy-to-understand way. No jargon, no buzzwords, just a clear explanation of what blockchain is and how it will affect the way you work.

10 essential Zapier automations to build in your accounting firm

In this hands-on video, Zapier expert Heather Satterley outlines how to create the 10 automations every accounting firm should be using.

Blockchain and its applications at work

Find out how blockchain will really impact you and the way you work with these real-life examples and use-cases.

Embracing collaborative intelligence to realize the benefits of new technologies

To realize the potential of new technologies such as artificial intelligence, machine learning and automation, humans and machines must work together.

The essential basics of blockchain in a simple and easy-to-understand way. No jargon, no buzzwords, just a clear explanation of what blockchain is and how it will affect the way you work.

10 essential Zapier automations to build in your accounting firm

In this hands-on video, Zapier expert Heather Satterley outlines how to create the 10 automations every accounting firm should be using.

Blockchain and its applications at work

Find out how blockchain will really impact you and the way you work with these real-life examples and use-cases.

Karbon is the one system that everyone opens every morning, and our go-to for all information about clients and work that needs to be done.